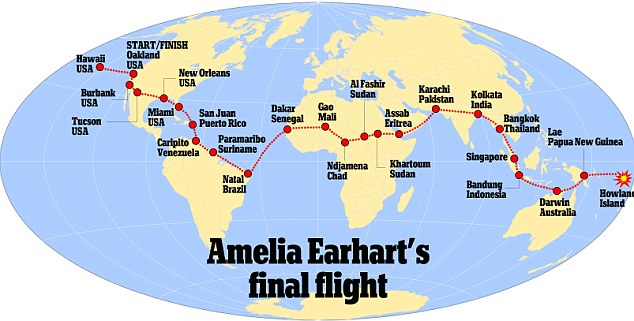 http://www.dailymail.co.uk/news/article-2336873/Carol-Vorderman-unveils-plans-solo-flight-world-follows-footsteps-hero-Amelia-Earhart.html
Even though a flight around the world had been done before, it was completed by a man and it was not flown around the equator. Earhart's lack of navigational skill prompted her to add a team to accompany her on the mission, including Paul Mantz as Earhart's technical advisor and navigators Harry Manning and Fred Noonan. On the first attempt of the world flight, the plane crashed on March 17 in Honolulu, Hawaii. This crash was caused by careless flying during the take off, causing a ground-loop (2). Since the aircraft was severely damaged, the plane was sent for repair and on the second attempt, the only few members remaining were Earhart and Noonan. While Earhart feared this let flight because she had never completed anything of the like, she felt obligated to follow through with her promise despite Putnam telling her to abort mission (2). 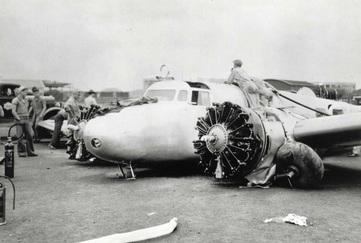 Aircraft damages in Hawaii http://www.pacificaviationmuseum.org/pearl-harbor-blog/2009/11
THE FIRST LEGS
The first legs of Earhart and Noonan's journey were the easy ones. On May 23, 1937 Amelia flew from Oakland to Miami. Toward the beginning, they flew eight hours to San Juan, Puerto Rico. From there, they were headed to Venezuela and then Dutch Guyana. On the way, Earhart utilized autopilot, an innovation developed in 1932. During the flight, Earhart took careful notes and jotted down observations of the lush greens and vivid blue sea. Her logbook aided her in writing a series of articles that The New York Herald-Tribune was paying her to write about her travels. As she promised Purdue she would do, Earhart intended on sending the logbook home with time to prepare for the book. After Dutch Guyana, the aviators headed for Brazil. In order to service the plane before the long flight to Africa, Earhart and Noonan stayed in Brazil for two days, walking, shopping, and taking photographs like tourists (7).
AFRICA
After a two day break, Earhart and Noonan began their 1,900 mile journey to western Africa and the French colonial city of Dakar (in modern day Senegal). The flight had been smooth until the aviators approached the coast of Africa where they were met with a thick, obstructing haze. Due to the disruption of vision, they ended up landing fifty miles north of Dakar in St. Louis, Senegal. Without fail the two were on course again the following morning for a long air route across Africa that would total 4,500 miles with four included stops for refueling (7).

REVERSING THE DIRECTION
At the end of their travels in Africa, Earhart and Noonan took on hundreds of gallons of gasoline before heading to Karachi (then India, now Pakistan) some 2,000 miles away. From Karachi, they then flew to Calcutta, 13,390 miles away (7). Earhart had hoped to miss the monsoon rains that strike India every summer by reversing the flight direction, but in Calcutta it had rained all night (7). As a consequence, the Electra would be forced to land on a muddy runway. Since there was even more rain coming, they could not wait in Calcutta because they could get stuck there for an indefinite amount of time. Hence, the aviators decided to refuel and head for Akyab (now Sittwe) in what was then Burma. They headed for Rangoon after a brief stop in Akyab. However, the weather was not improved at all. Pounding rains took paint off the wings of the plane and made it impossible to see. Despite these obstacles, Noonan managed to return them to the airport with his expert navigational skills. In the bright sunlight the next morning, they tried for Rangoon once again. The proceeding legs were Rangoon to Singapore (flight over 12,000 miles), to Baudung, Java, in what was then called the Netherlands East Indies (modern-day Indonesia) (7). Necessary repair to the fuel regulator coupled with monsoon weather forced them to stay in Baudung for a few days. Earhart took advantage of the time off in order to rest before taking off once again for Port Darwin, Australia on June 27. Preparing for the long, cross-ocean flights ahead, lots of plane inspections were carried out, an important repair made to radio direction finder after a a fuse had blown, and they lightened the plane by sending home anything they did not need (7).

HEADING TO HOWLAND ISLAND
At dawn on June 29, 1937, Earhart and Noonan they took off for Lau, New Guinea. The two did not arrive until 3pm because of strong headwinds that were battled for the seven hours and forty-three minutes after take off. At Lau the plan was serviced:  oil and oil filters changed, sprak plugs cleaned, and engines checked (7). They also studied maps and charts, realizing that their intended touchdown point, Howland Island, was a a cry small spot in the Pacific and would be very difficult. Although, Noonan was confident he would have no trouble finding it using his impeccable navigational skills. With an abundance of confidence, Noonan climbed into the Electra with wary Earhart at ten am on July 2, 1937.
DISAPPEARANCE