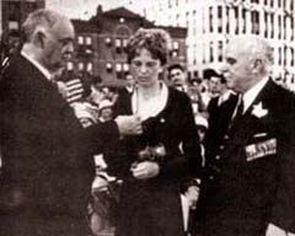 The Distinguished Flying Cross given by the U.S. Congress is awarded to Earhart at Los Angeles on July 29, 1932. http://www.ameliaearhartmuseum.org/AmeliaEarhart/NewsClips/clip630721.htm
After Earhart's first trip across the Atlantic, she received the following awards. However, they were only the firsts of her many recognizable accomplishments (7).

The Distinguished Flying Cross
given by the United States Congress

Earhart got her first big break in 1928 when G.P. Putnam's Sons Publishing Company sponsored a transatlantic flight that was headed by Commander Richard Byrd. Having a woman onboard the flight would increase publicity, so the sponsors chose Earhart to be a passenger after her impressive interview, making her the first woman to ever cross the Atlantic as a passenger (1).

As a result, Earhart became an immediate celebrity. From 1928- 1935, Earhart experienced a lot of success in her aviation endeavors. She set new altitude and speed records, was the first person to fly solo from Hawaii to California, and was first person to fly nonstop from Mexico City to New York (1).

Of even greater importance, the proudest moment of Earhart's life had to have been her solo flight across the Atlantic Ocean in 1932. During this flight she set several records, was the first woman to make the journey, was the first person to make the crossing twice, and she set records for the longest non-stop flight distance and fastest speed (1).

What was Earhart's legacy?

According to biographer Mary S. Lovell, Earhart's legacy "is the legend of an ordinary girl growing into an extraordinary woman who dared to attempt seemingly attainable goals in a man's world" (7). Regardless of her humble beginnings and chaotic childhood, Earhart channeled the ability to rise above the expectations set for women and achieve that equal to men and more.

However, Earhart's husband George worried that the myths surrounding her disappearance would overshadow the true legacy Earhart left behind.

Although it is nearly impossible to gauge the extent to which Earhart inspired the generations of women who came after her, there is no doubt that she was an influential and revolutionary symbol for the time period. At the time, women were placed under the domestic sphere and fulfilled the roles of wife and mother. Many women felt limited to domestic capabilities, but Earhart encouraged these women to challenge the standards and stereotypes of society. To Earhart, the effort of pursuing one's dreams was much more important than abiding by societal norms.

Not only did Earhart challenge stereotypes, but she valued adventure and would not be frightened or deterred by anything. In many instances, Earhart had boldly stated that she was not afraid of death. Aware of Earhart's confident demeanor, Eleanor Roosevelt claimed, "I am sure that Amelia's last words were 'I have no regrets'" (7).
In this speech, Earhart describes the increasing role of women in science. Through her words, Earhart attempts to encourage other women to continue the work of legacy she has established. At the time, the scientific industry was still greatly outnumbered by men and she envisioned a workplace where women were involved and able to contribute to the evolution of society. Amelia Earhart portrays her wishes for other women to experience the same liberating feeling of independence which she gets from flying and her speech serves as words of encouragement. She hopes to embolden and inspire her fellow females to follow in her lead and continue to increase the prominence of women in society.